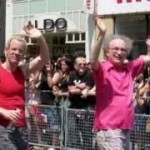 “You won’t have a successful movement if you wait for everyone to catch up to you….Our story is fundamentally a love story. I’m so proud of our Canadian story so many years ahead of other countries because the message did go forth and it does give people hope” – The Michaels

On July 20, 2005 Canada became the fourth country in the world and the first country outside Europe to legalize same-sex marriage nationwide, thanks to the enactment of the Civil Marriage Act. The story of marriage equality began long before many activists even anticipated it a possibility. Its origins can be traced back to cornerstones designed, simply, to protect the rights of Canadians. In retrospect, these cornerstones were seminal moments. After all, social change involves one step following the next until you’re standing in front of an unprecedented ruling, at an unprecedented time and place.

In our exploration of Marriage Equality and its evolution in Canada, we sat down with Michael Leshner and Mike Stark – forever known as “The Michaels” – to discuss how it felt to be part of the historic movement that saw them being the first same-sex couple in Canada to be legally married. We also spoke with former prime minister, the Right Honourable Paul Martin, who shared with us what inspired his decision to introduce Bill C-38 (despite facing numerous detractors, even within his own party) which was then passed into law as the Civil Marriage Act.

In this digital story, the Michaels reminisce about the day they finally said “I do” and how their struggle for marriage equality changed their lives – and those of others – forever.

In this podcast, the Michaels open up about what marriage equality means to them, discuss how their activism and a court case changed the course of history and offer advice for other activists and changemakers looking to transform the status quo.

In this digital story, The Right Honourable Paul Martin discusses what inspired his decision to enact the legislation that would forever change the way Canadians define marriage. It was a no-brainer in the end, he says, referencing a powerful personal story and a powerful document: the Charter of Rights – as his primary influences.

In this podcast Mr. Martin discusses the law that will always underpin his legacy, the dissent that followed his decision and the pride he feels in having taken the step forward nonetheless.